My motivation as an entrepreneur

Hi, my name is Sebastian Küpers, I am 32 years old and one of the two co-founders of The Otherland Group, which is working on the app thin.gs right now. In this post I would like to give you an idea why I am doing, what I am doing right now as an entreprenuer.

The family I was born in is quite an entrepreneurial family. My grand-father Gerhard Küpers layed the ground by funding a company himself after the second world war, he experienced the “Wirtschaftswunder” in Germany and became quite wealthy with what he was doing.

His two sons, my father and uncle, both grew up with this company and became entrepreneurs themselves and for me it always was very clear, that there only was one viable career path for me:

I wanted to become an entrepreneur myself.

I was very lucky that I grew up with personal computers quite early – I can remember sitting in front of a Macintosh on the lap of my father when I was 5 years olds and that I had my first own personal computer in 1987 when I was 7 years old. A Schneider CPC which had just Basic as operating system which teached me the hard way how to write software, as it was the only way to do something with it.

When I was a teenager, the new economy happened and I still was in school during that time and I had the feeling: “oh, why am I not just 3-4 years older, to be part of it. I could be a successful entrepreneur by now and my family would be proud of me.”

In 2000 I moved to Berlin and the city I was dreaming of the last 4 years swallowed me and I had an awesome time in Berlins nightlife for about 18 months, with going out pretty much every night (except Mondays) – hanging around at the “Cookies”, “WMF”, “Sage Club”, “Carrera Club”, “Pogo”, “Panorama Bar” and all those places where you wanted to be in these days – and my excuse was, that I was working on my “network” to become an entrepreneur.

The truth was, that I met my first three co-founders through a student job I needed to do after I went broke after this 18 months spending all my money on “networking” - which I actually had gotten by my family to study. I then started my own little advertising agency with these guys, was responsible as managing director for online and we bootstrapped this company the hard way over the period of time of four years until the end of 2005

In the early days after funding this agency I got in a big dispute with my father, which ended in the situation, that since then I never got a single Cent by my family again.

The reason was: he doesn’t wanted me to become an entrepreneur, but I should study and get a well-paid job. It’s hard to believe, that when you grow up in a family of entrepreneurs your own dad doesn’t want to help you to become one by your own – but that’s what basically happened.

He told me on the phone, that his money wouldn’t be well invested in me, if I wouldn’t study, but just follow my "castles in the air".

The effect of this was, that I got even more ambitious to make it on my own with no financial backup at all – and as we were bootstrapping our agency I ended up working on my student job at night for 5-8 hours to then work in our agencies office over the day and most of the time I just sleeped a few hours under my desk in the agency to not lose time between the two jobs by driving home.

We grew this agency to a point where we had a couple of employees and we did quite a good job. During these days I developed the concept for a new intranet for a German group of companies with 40.000 employees, developed an online-shop completely on my own in PHP, did a few campaigns, company websites, microsite etc.

But to be honest: it wasn’t even close to what I wanted to become and it still didn’t pay me enough money to make a good living from it. In 2006 I finally left the agency I co-founded and decided that it was time to work for a big player in this business, to learn more, to earn more and to proof myself that I was able to become a valuable employee even without studying at all, but choosing the way of bootstrapping my own agency – and then I got hired by Pixelpark.

The next years have been determined by my work for Pixelpark – even though it has been interrupted by two adventures I couldn’t resist to try – and I became really good in understanding, questioning and creating innovative solutions for the problems well-known companies explained to me in their briefings. I ended up being promoted as “Director Planning” at Pixelpark and I now have a well paid job, which maybe a lot of people would dream of, as it only includes what I think is the most fun in the work of an agency at all.

But deep inside of me my heart was still burning to do something different from that and I really couldn’t let my dream go to become an entrepreneur and I started to really questioning myself: why?

Why the heck do I want to become an entrepreneur?

There is no doubt that in my case it has a lot to do with how I grew up. But in my early 20ies I have to say that when you would have asked me this questions I would have answered: “Because I want to be rich!”

But it was even worse than that: I found out about myself in a therapy I did during a time where I suffered from a depression, I was driven primarily by the wish to impress my family – even if at least my father had clearly stated, that he wouldn’t be impressed by me becoming an entrepreneur at all. It feels really sick, if you suddenly find out, that your motivation so far has been something what is impossible to achieve and controlled by others and not by yourself.

So - I am quite proud of myself that I can say today that I really got rid of these in my eyes unhealthy motivations in a unfortunately very painful process.

Then the moment came where my grand-father died, which was a really disruptive moment for me. Maybe the most life changing moment for me at all.

I haven’t had a good relationship to my grand-father, because I didn’t visited my family in my hometown very often - but he still is my biggest source of inspiration, biggest role model and source of confidence, that I can achieve my goals.

When I stood at his grave during the funeral, with this shovel in my hand to throw some top soil on his coffin I suddenly realized one very important thing.

I realized that there will be one day, where I will be in the same situation as my grand-father. Dead in a coffin. My life being once and for all over. I asked myself what I would have wanted to have achieved to lay in this coffin with my soul smiling.

There are two things:

Out of the sudden this really sad situation became a really happy moment in my life. I kept thinking about this intensively for a couple of weeks and I realized that: this is it!

It’s not the money. It’s not about making my dad proud. It's not about just having a good life.

It’s about my own family, my children and hopefully grand-children one day – and it's about what keeps me away from sleeping at night and keeps me spinning around ideas every minute in my head:  it's about my wish to create something that will survive me and has an impact.

I only have this one life and some day it will be over. I am already 32 years old. So I really need to get started with building something sustainable and the only advisor for this is in me already. I saw this video of Steve Jobs after I realized all that and when I saw it the first time I started crying, because it resonated so deeply in me and has a lot to do with what I have experienced myself.

It was like a fog which has been in my head for more than 15 years going away to suddenly see clearly what I really want from life.

That was also the point where I finally decided that I will start The Otherland Group together with Markus again, as I know that he is the only guy with whom I can make this happen.

If you suddenly have discovered your personal meaning of life it really frees your mind, and gives you a focus which enables you to deeply think about problems and their solutions without being compromised by unhealthy motivations. 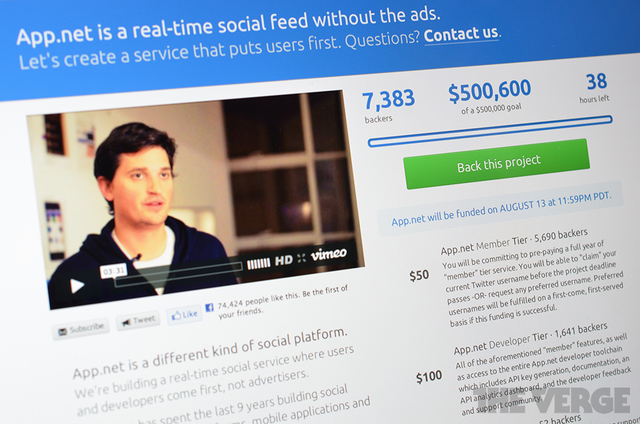